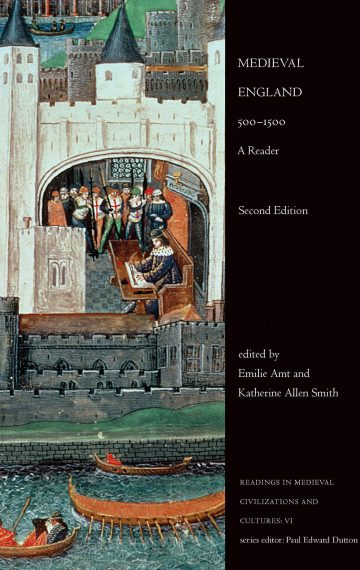 The new edition of Medieval England, 500-1500, edited by Emilie Amt and Katherine Allen Smith, spans several centuries in 102 documents that present the social and political history of England. The documents include constitutional highlights and records such as the Magna Carta and Froissart’s Chronicles, as well as narrative sources describing the lived experiences of a range of historical actors. These narratives fit into thematic clusters covering topics such as the Anglo-Saxon monarchy, lay piety, later medieval commercial life, queenship, and Jewish communities.

Thirty-nine new sources discuss significant events like the conquest of Wales, the Gregorian mission, and the Viking invasions. They also allow for multiple examples of particular genres, such as wills and miracle collections, to facilitate comparative analysis. Introductions and questions situate each source in the historical landscape and facilitate engagement with the text, inspiring readers to delve into the medieval past. The book also features 40 illustrations, a map, and an index of topics. Additional resources, including essay questions, web resources, and a timeline, can be found on the History Matters website (www.utphistorymatters.com).