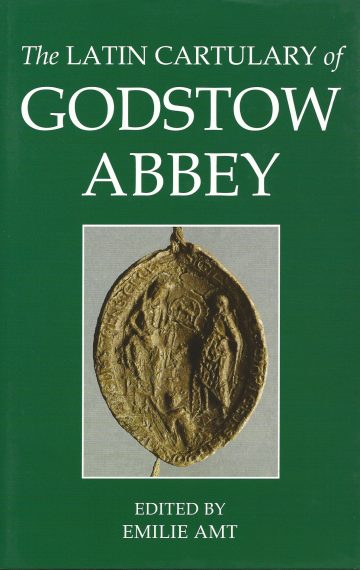 This first published edition of the Latin cartulary of Godstow Abbey outside Oxford is an important text for the history of medieval religious women. Compiled in the early fifteenth century, and probably written by Godstow’s prioress Alice of Eaton, it contains more than 900 documents written for and preserved by this well-known community of Benedictine nuns.

The contents include a unique Anglo-Norman verse life of Ediva of Winchester, whose dreams prompted her to found the abbey in the early twelfth century. Numerous early charters in the cartulary identify other twelfth-century nuns and their relatives, and shed light on the founding of the abbey, its royal and private patronage, and its extensive real estate holdings. Other documents in the volume are excellent sources for women’s literacy and culture, religious practices in the diocese of Lincoln, social relations between the nuns and the larger community, and the local urban and rural economy in Oxfordshire and nearby counties.

The volume’s introduction examines the founding of the abbey, dating it earlier than has previously been done, and provides new information about the abbesses of Godstow. In the text, documents dating from about 1225 or earlier are printed in full, in the original Latin, with English introductions and notes; later documents have been fully summarized in English, with complete witness lists. This is also an invaluable text for local history, topography, and genealogy. This text is the original of the Middle English translation that was published in the early twentieth century.