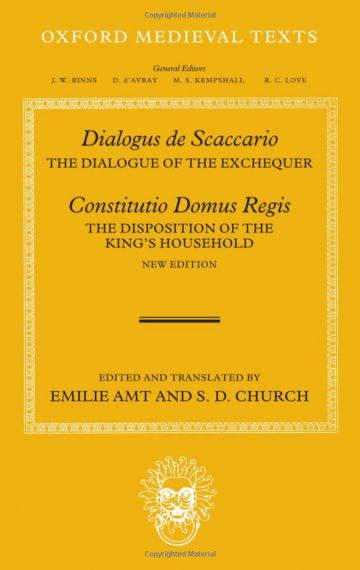 This new edition contains the texts and translations of two key documents in medieval English history. The Dialogus de Scaccario, or Dialogue of the Exchequer, written by Richard fitzNigel – an insider at the court of Henry II (1154-89) – has long formed the basis of historical knowledge of royal finance in the later twelfth century. It focuses on the annual audit of the sheriffs’ accounts that led to the writing of the documents known as the pipe rolls. The Dialogus details the personnel and procedures of revenue collection at a time of critical importance for English government, administration, law, and economic development. It is a practical handbook rather than a theoretical treatise, and it occupies a unique place in English history.

The Constitutio Domus Regis, dating from the reign of Henry I (1100-35), is the first document to describe the payments made to that group of men (and one woman) whose duty it was to look after the king’s bodily needs. Kings have always been surrounded by such people, but it is not until the early years of the twelfth century that we can begin to see these people in any detail. The Constitutio is an enigmatic text and has been largely misunderstood by those who have used it before now.

This edition is the first to collate all the relevant manuscripts fully. The two documents are accompanied by new readable translations, full introductions, and detailed notes, making them accessible and comprehensible twelfth-century English texts. Together, they provide a window into the workings and personnel of medieval English government. The Dialogus has been edited and translated by Emilie Amt, the Constitutio by S.D. Church.